skip to main | skip to sidebar

Yep,…“Mistakes (and other stuff) happens,” but nowhere quite like in “the world of development”. Many books have been written on the subject; some amusing chronicles of the foibles of well-intentioned development workers and the unintended consequences that spring forth from their best efforts; some scathing indictments against those idiots who squander your hard-earned donor and tax dollars. At Bridge2Rwanda we are determined that our every mistake will be a valuable lesson well learned and not repeated. But we make mistakes, and we seem to live in a world that is governed and guided by mistakes. Now, having made that confession, I want to write about a specific development project where we have done fairly well, small as it is. This small project is illustrative of some fundamental principles to which we attempt to adhere.
It all starts with the United States Marines and their second dearest slogan (second only to “Semper Fi”): “Let’s party!” So the Band of Brothers assigned to maintain security at the US Embassy in Rwanda wanted to have a party. But principled as they are, they needed a reason,… a justification to party shamelessly (and attract the pretty ladies of Kigali.) So they decided to have a fundraiser. For what? They didn’t know, so we helped them out: Raise funds to purchase Cargo Bikes from Project Rwanda, and Project Rwanda will give the Cargo Bikes to Bridge2Rwanda for appropriate distribution to the poor. What a great idea! Now “let’s party!”,… a party that raised $2,200. 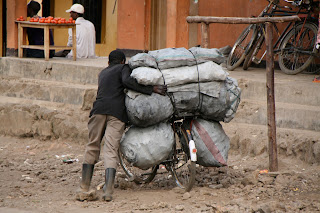 Sidebar: What is a Cargo Bike, formerly referred to as the Coffee Bike?

It is the brainchild of Tom Ritchey. Who is Tom Ritchey? Do you really not know? Tom Ritchey is the patron saint, godfather and creator of mountain biking,… and a renowned bicycle designer and engineer,… and an elite cyclist,… (and my friend). He came to Rwanda and saw 1950s vintage bicycles, patched and welded and wired together, being used as “Rwandan work trucks,” transporting tremendously heavy loads all of the country. Such bikes are so heavily loaded that they are not ridden, they are pushed. As with most people's visits, Tom’s trip became a love affair with Rwanda, and he wanted to do something that would make a difference. So Tom Ritchey designed what was initially called the Coffee Bike, but is now commonly called the Cargo Bike. I call it an “extended cab” Rwandan truck. As I now drive all over Rwanda, I see Tom’s bikes hard at work EVERYWHERE, and I think “Tom Ritchey, what you have done REALLY matters!”


Now back to the development project: 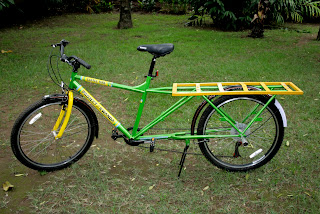 So the Semper Fi guys had a great party, cheerfully gave $2,200 to Project Rwanda, and Project Rwanda gave nine Cargo Bikes to Bridge2Rwanda. So what were we to do with them? The immediate impulse (and easiest strategy) is to select nine poor young men, with broad smiles and perfect teeth, and give them each a Cargo Bike, and bask in the joy and love that they lavish upon us,… and feel really good about ourselves,…  and go home and have a beer and consider it “done”. Easy and fun, but ultimately of little lasting value, and probably more harmful than helpful. Having already made this mistake, and having seen it made  countless times by others, we proceeded with a different, wiser strategy.
We knew of  a very poor, remote community that faces many economic development challenges, including their self-identified need for jobs for their young men and transportation to get their goods to market. THEY identified their need for jobs and transportation.
Second Principle: Observe and listen to the community as they determine their own needs. Do not tell the community what they need, but rather come alongside and encourage and assist them in addressing their self-identified needs.
So, now can we just drop off the bikes in the appropriate community and go home and have that beer? No, there must be a thoughtful strategy that teaches, trains, and empowers, without doing harm. This is about much more than giving away bikes. This is about personal dignity, growth, empowerment, entrepreneurship, and sustainability.
Third principle: Never give anything away “for free,” except your love, time, attention, and encouragement. Our Rwandan friends do not live in a world where “bikes are free.” To suggest otherwise is to confuse and corrupt them, and create an attitude of entitlement and/or dependency that will stunt their future growth and success. “Give-aways” also indulge and reinforce our corrupt “God complex” and our local friends’ perceived “inferiority complex,” both of which are extremely destructive lies to everyone in the equation.
We need leadership to get these  Cargo Bikes properly distributed. Us? No, a local community leader who must be identified, elevated, empowered, and given an opportunity to assume leadership and responsibility.
Fourth principle: Do not play God and lord over others as their leader, but instead identify and work through a local leader (who has much greater understanding than we ever will). 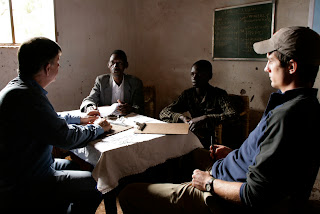 So we asked Christophe, our friend and an established leader in the local community, to head a Governing Committee and to serve as the day-to-day Project Manager. The Rwandans on the Governing Committee outnumber the muzungus (pale white guys). How shall we proceed? The Governing Committee discussed various options, and decided to empower nine young men (all strong, but poor and jobless) by placing each of them on a Cargo Bike, thereby making them each the sole proprietor of his own “Transportation Company.” Each rider would possess a bike pursuant to a written “Lease to Own Contract,” under which he would pay less than $5 dollars per week from his profits, until he paid the full purchase price of $300, at which time he shall become the full-fledged “owner” of his bike. The contracts were written in both Kinyarwanda and English, and executed and “sealed” by the local governmental authorities, who were thrilled by this project. Unfortunately, we had many more than nine young men who wanted in the program.
Nine bikes times $300 equals $2700, $500 more than was paid for them. What’s the deal? Answer: Built in interest,… financing,… the cost of money. Are you kidding me?!? No.
Fifth principle: Good development should acknowledge and teach the realities of the world, the truths that will be present and necessarily reckoned with even after we are gone. Example: Only your local mattress store gives free financing, and that is only because they are lying to you about the actual fair price. Credit costs. That is a fact of life. To pretend and teach otherwise is harmful.
So, now nine young entrepreneurs, having received considerable training from our Rwandan Project Manager, are each proudly working their own “Transportation Company” and are making weekly payments on their contractual obligation from their net profits. They are looking forward to receiving the title to their Cargo Bikes, extraordinarily valuable capital assets that they may work (and repair) for their entire lives. 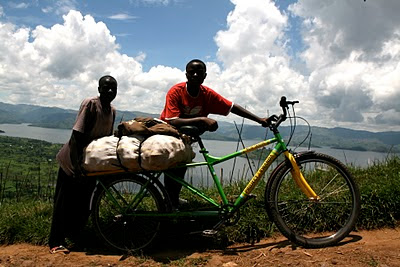 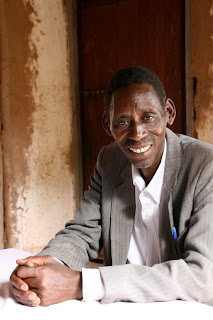 The weekly payments are deposited into the Committe's local bank account. What will we ultimately do with the $2,700? The Governing Committee considered that question last week. Initially it was thought that the money would go to Mwiko, the local primary school that is grossly under-resourced. But last week Christophe urged that we take $500 currently “on account” and purchase two more Cargo Bikes and put them in action with anxiously awaiting young men who want to be entrepreneurs and operate their own "Transportation Company." Christophe argues that his strategy will ultimately result in us having $3,300 to contribute to the local primary school. The final decision by the Committee is still pending.
So all has gone well,… no mistakes? Nope. We have made mistakes. We did not train the riders well enough in the proper maintenance of their bikes. A few bikes are presently “out of service” as we await parts and repairs, necessarily resulting in a temporary "freeze" on weekly payments. Will we provide parts and repair “for free.” As much as we WANT to,… “NO!”… because that is not the real world in which the riders must live and succeed. But we learn. And the riders learn. As Rwandans say: “Slowly by slowly a bird builds its nest.”  Sixth principle: And so it must be with good community development work: "Slowly by slowly."

Seventh principle: Eventually the proper time will come for that cold beer.

POSTSCRIPT: This is not really what Bridge2Rwanda does. This is what Bridge2Rwanda team members do for fun in their "free time,"... after Anna, Betsy, Kelly, and Wes teach a full day and prepare their lesson plans for the next; after Griffin works an eight hour day “building capacity” at Ishema; after Suzie works her communications and journalism, and Kat plans upcoming events, and Mark gets our business affairs in order, and they all build up our new ISOKO Institute; after Caleb and Louise do their doctoring; after Kevin covers the countryside designing mini-hydro power operations; after Hadley, Muna, Tim and Matt digest and report on major contracts submitted to the Ministry of Justice. Yep, this is the extracurricular, somewhat spontaneous, super-fun stuff that energizes us. Oh, Blayne and me? What is our “day job”. Well, we just sit around and drink beer.
Posted by Tom Allen at Wednesday, October 06, 2010

Tom Allen
Kigali, Rwanda
I am reluctant to do the Bio thing. Nothing "about me" should be the focus here, except as this open journal may resonate with (or provoke) your own thoughts. But I offer this much: After 30 years as an attorney, I am now a typical Halftimer who is determined to move beyond success to significance. Inspired and convicted by three sons (Tommy, Nathan & Wesley) who live passionate and adventurous lives, I am now privileged to participate in the exciting social changes and development occurring in Rwanda and elsewhere in Africa, hoping to empower the desperately poor. But I must be very clear on this: I am just your average coward. Suffering and sacrifice are very foreign concepts to me. However, I now believe that life comfortably ensconced in a safe cocoon misses out on too much of what might be learned, experienced, and shared with others in the Majority World, many of whom are crying out in desperate need, and some of whom beam with smiles and contentment such as I have seldom seen. I want to know them and their lives.